Are Books Dying? "It’s a Book" Attempts to Give Readers an Answer 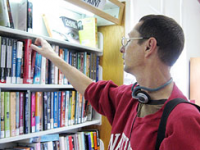 Picture books are just for children, right? Not always so.

Lane Smith’s picture book, It’s a Book has the look and feel of a book for the very young, with its thin, flat shape, its brief text, and abundance of charming, colorful illustrations. And it is typical child fare in that it is an animal tale with its three characters: a mouse, a jackass, and a monkey. The animals interact with lively questions from the digital and web savvy donkey about the monkey’s book, including “Can it text? Blog? Scroll? Wi-fi? Tweet?” and the monkey’s mostly patient refrain-type answer, “No, it’s a book.”

But it is also a book for adults for the following reasons. First, it deals with the hot topic, “Are books dying or dead?”—a current underlying anxiety for avid readers of the traditional, print book that is addressed with humor, as a battle between the old and the new, with a surprising conclusion. Second, a possible pile-up of literary references and allusions has greater appeal for adults. Robert Louis Stevenson’s adventure classic enjoyed by children, Treasure Island (1883) is of course the unstated title of the book the monkey is reading in the story. But there may also be allusions to The Life of Pi (2001) author Yann Martel’s latest literary reference laden book entitled Beatrice and Virgil (2010), which concerns a monkey and donkey; and so also allusion to Dante’s Divine Comedy (1307-); and so on. Finally, the last line in It’s a Book includes a double-entendre meant for adult ears. It, as well as the entire book, begs discussion and examination, a good thing for adults and children when it comes to the illustrated and written word.

Are Books Dying? "It’s a Book…

Picture books are just for children, right? Not always so.Lane…