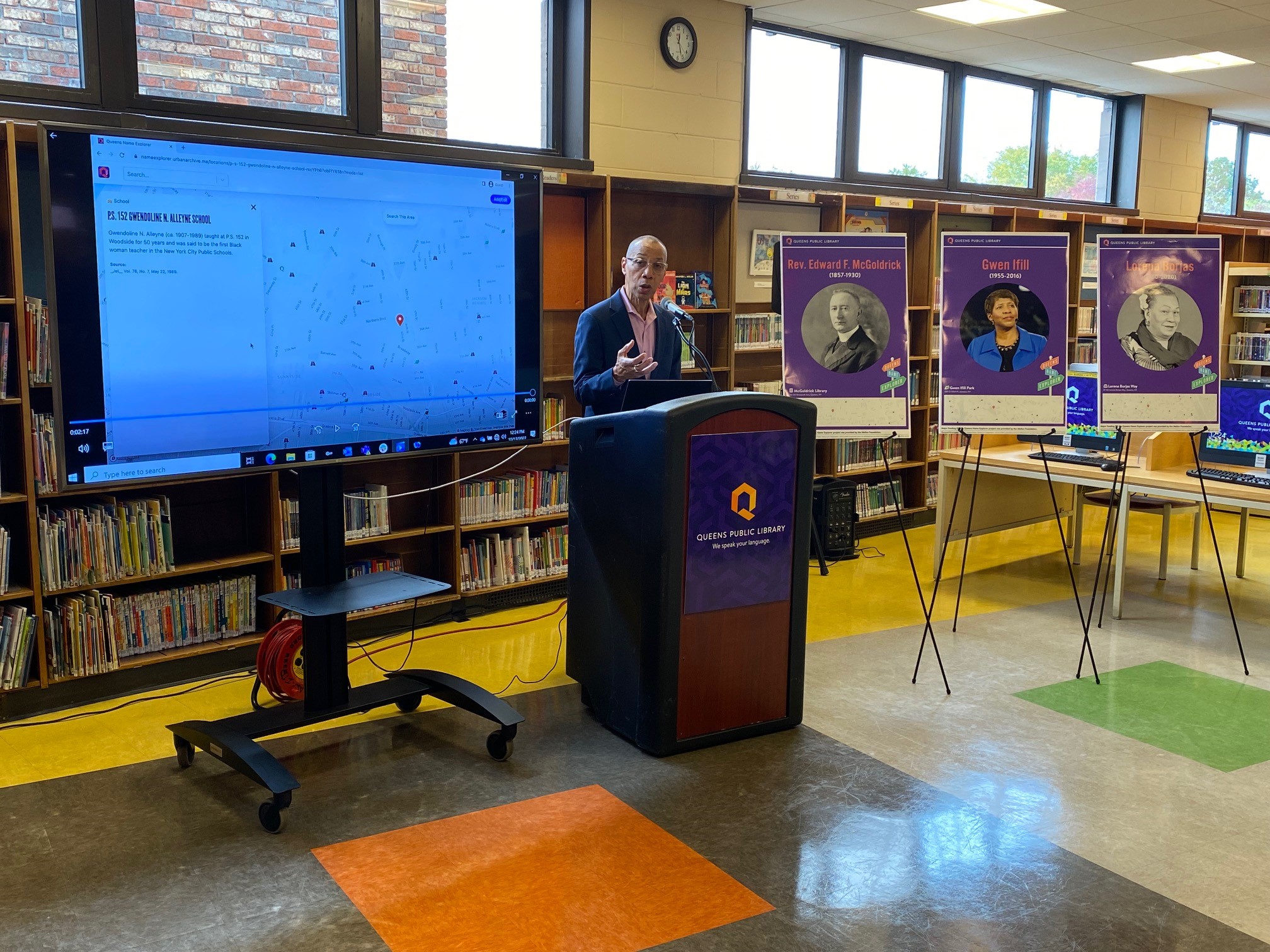 The program was announced by Dennis M. Walcott, President and CEO of Queens Public Library, who also unveiled the project’s website. He was joined by Natalie Milbrodt, Director of QPL’s Queens Memory Project, which will lead the initiative, and Jason D. Antos, Executive Director of the Queens Historical Society.

As part of the project, the Library will ask the public to join the effort to find local spaces that are named after individuals. People will also be able to share photos of these figures or personal remembrances of them via the Queens Name Explorer website.

The initiative will encompass places named after well-known individuals, such as Gwen Ifill Park in Jamaica, near the longtime PBS anchor’s birthplace, as well as places honoring local activists, such as Lorena Borjas Way in Jackson Heights, named after a Mexican-American transgender and immigrant rights activist.

The event was held at the McGoldrick branch of Queens Public Library in Flushing. The branch serves as yet another example of a place named after an individual. Its namesake, Rev. Edward McGoldrick, was an Irish immigrant and priest, who served as the first pastor of St. Andrew Avellino Church in “Upper Flushing.” Father McGoldrick sought to promote education in the area and advocated for the opening of a library there. He was also on the Queens Public Library’s Board of Trustees from 1921 until his death in 1930.

“Since its inception, Queens Public Library has amassed and maintained an enormous collection of maps, newspapers, photos and other reference materials about the history of Queens County, including its history before becoming part of New York City in 1898,” said Walcott. “This fantastic, truly unique project will deepen and enhance our existing collection and cement our role as the leading repository dedicated entirely to Queens's rich history in New York City.”

The project will rely on crowdsourcing, with the public's input adding to the wealth and diversity of information. The goals of the project include:

“Our team has combined archival research and data mining techniques to assemble a treasure trove of historical information about these individuals, sourced from our own archives, NYC Open Data and other sources, but it’s far from complete,” said Milbrodt. “We’re asking anyone with information about the history behind named places in Queens – whether it’s a published photo or article, or a personal remembrance, photo or video – to visit the Queens Name Explorer website to share their additions and edits to the place name entries on the map. Many individuals represented with honorary namings are well known to a small local contingent, but not well-known outside their immediate communities. We aim to raise awareness of these beloved local figures who have made lasting contributions to our city.”

The Queens Name Explorer team will display the information gathered on the project’s website, queenslib.org/explore, powered by UrbanArchive.org, with an interactive map featuring each named place in Queens with icons denoting the various location categories.

“This effort will do a magnificent job to strengthen the amount of available historical information relating to Queens,” said Antos. “We’re thrilled to be working with Queens Public Library and the Queens Name Explorer team to bring this project to fruition so our residents can learn about all the people behind the names we see on street signs and buildings every day.”

The Queens Name Explorer project will also include analyzing the demographics of Queens neighborhoods to identify gaps in representation between named places and the people of these communities.

Queens Name Explorer is funded by a generous grant from the Andrew W. Mellon Foundation.

About Queens Public Library
Queens Public Library (QPL) transforms lives by cultivating personal and intellectual growth and by building strong communities. It is one of the largest and busiest public library systems in the United States, dedicated to serving the most ethnically and culturally diverse area in the country.

An independent, non-profit organization founded in 1896, Queens Public Library offers free access to a collection of more than 5.4 million books and other materials in 200 languages, technology, and digital resources. Prior to the pandemic, the Library hosted more than 87,500 educational, cultural, and civic programs annually and welcomed 11.4 million visitors through its doors.