Queens Public Library will serve as an important partner for New York City as we help you participate in the census. 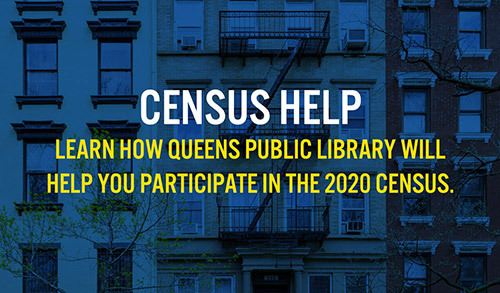 Do You Have Questions About the 2020 Census?

Submit questions in your own language through our census help forms:

Come get school supplies and help your community get its fair share of federal funding by filling out the census! The more people the census counts in your community, the more money you will have for your schools, hospitals, roads, and even libraries! The U.S. Census Bureau will be there to assist you and people who take the census on the spot will receive an extra gift.  Giveaways available while supplies last.

Dance Counts | We All Count with the CUNY Dance Initiative

NYC choreographers stand up to dance and be counted! Watch original tap, street, swing, and contemporary dances sparked by the critical nature of the 2020 census, and listen in on a conversation about arts and activism and how the pandemic is shifting these choreographers’ approaches to their work. Watch live on our Facebook page, https://www.facebook.com/QPLNYC.

Join us for Queens Gets Counted! an all day celebration and civic initiative to ensure Queens is accurately represented in the 2020 Census featuring live and pre-recorded performances in an online program from 12-2pm and tabling and giveaways at locations throughout the borough from 12-5pm. Spread the word, bring your friends, and get counted at the event to win cool giveaways! (details below)

Tune in for two hours of great local entertainment, while also learning why the US Census is so vital to Queens and New York and competing for online giveaways. Link coming soon!

Borough-Wide Census Tabling – Meet Us On The Block!
12pm – 5pm

Queens Gets Counted! will have dozens of tables all over Queens where you can complete your census on the spot and take home awesome giveaways! Even if you’ve already taken the census, claim some swag by bringing a bunch of friends who haven’t taken the census.

Find us at any of these partner venues:

Read our list of frequently asked questions about the census.

The U.S. Constitution requires the federal government to count everyone living in the country every 10 years. This official count of the population is called a census, and the next United States census takes place in 2020. It will also be the first primarily digital census, where people are encouraged to fill in their information online.

The quickest way to respond to the 2020 Census is online with your Census ID. You can use any Internet connection and complete your census form online here. You can still respond even if you don't have a Census ID.

Census data will determine how more than $650 billion in federal government resources will be distributed over for the next decade to every state, and where schools, roads, hospitals, child care centers, senior centers, and other services are built. Federal programs rely on census data, and so does our democracy—these data determine how many seats New York will have in the U.S. House of Representatives and how district lines are drawn at all levels of government.

If we improve the response rate from historically undercounted populations like people of color, immigrants, and the LGBTQ+ community, the census will provide reliable data to inform advocates, policymakers, and researchers working on issues important to them. (The 2020 Census won’t ask about your sexual orientation and gender identity, but it will count cohabiting same-sex couples for the first time.)

Let’s make sure every New Yorker counts in 2020!

Census 101: What You Need to Know (Census Bureau)

Who Should Be Counted Where? (Census Bureau)

Why We Ask (Census Bureau)

What Does the Census Fund? (Counting for Dollars New York)

A List of Programs that the Census Funds in New York City (Pg 10, Table 1)

Businesses and the Census (ABNY)

Why Your Company Should Become a 2020 Census Partner (Census Bureau)

Why the Census Matters to Girls, the Environment, and More (Georgetown Poverty Center)

HOW DO WE FILL IT OUT?

The Internet Self-Response Portal: What to Expect, Census Counts, and others

Stay Safe While Filling out the Census (AARP)

How to Identify a Census Taker (Asian Americans Advancing Justice)