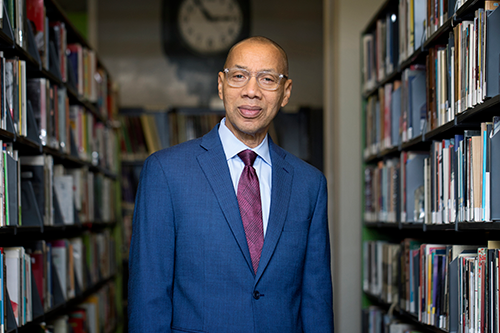 Dennis M. Walcott is the President and CEO of Queens Public Library, one of the nation's largest public library systems with 66 locations in the most diverse urban area in the world. He joined Queens Public Library in March 2016. Dennis is a lifelong resident of Queens and has spent his entire career in public service and education.

Prior to joining the Library, he served as the state-appointed monitor of the East Ramapo School District, advising the NYS Education Department on reforms and improvements to ensure more effective and equitable service for the district’s students.  In 2014, he was named Honorary Distinguished Fellow at the University of the West Indies and he has been an adjunct professor at Fordham University's graduate program The Fordham Center for Nonprofit Leaders.  From 2011 through 2013, Dennis served as Chancellor of the New York City Department of Education, where he led transformational change across the nation’s largest school system, which serves more than 1.1 million students in 1,800 schools across the five boroughs.

Prior to his appointment as Chancellor, Dennis served as Deputy Mayor for Education and Community Development during the Bloomberg Administration, overseeing and coordinating the operations of the Department of Education, the New York City Housing Authority, the Department of Youth and Community Development and the Mayor’s Office of Adult Education.  He served on the board of the Governors Island Preservation and Education Corporation, was the Board Chair of NYC's Fund for Public Education, and previously served as Co-Chair of the Mayor’s Commission for Construction Opportunity. Before working at City Hall, Dennis served as the President and Chief Executive Officer of the New York Urban League for more than 12 years, where he expanded educational and youth service programs, including Jeter’s Leaders, Bridge to Brotherhood, Healthy Start, Northern Manhattan Perinatal Partnership, and the 140th Street Building Block Program.  He began his career as a kindergarten teacher.

Dennis graduated from New York City public schools, including P.S. 36, I.S. 192, and Francis Lewis High School, all in Queens. He graduated from the University of Bridgeport in Connecticut with a bachelor’s degree and a master’s in education in 1973 and 1974, respectively. In 1980, he received his master’s in social work from Fordham University. He has served on numerous boards including Carver Bank Corporation, Primary Care Development Corporation, and the former New York City Board of Education. He has also served as an adjunct professor of social work at York College and as a talk show radio host. Dennis and his wife Denise have four children—Dejeanne, Dana, Shatisha, and Timmy—and several grandchildren.