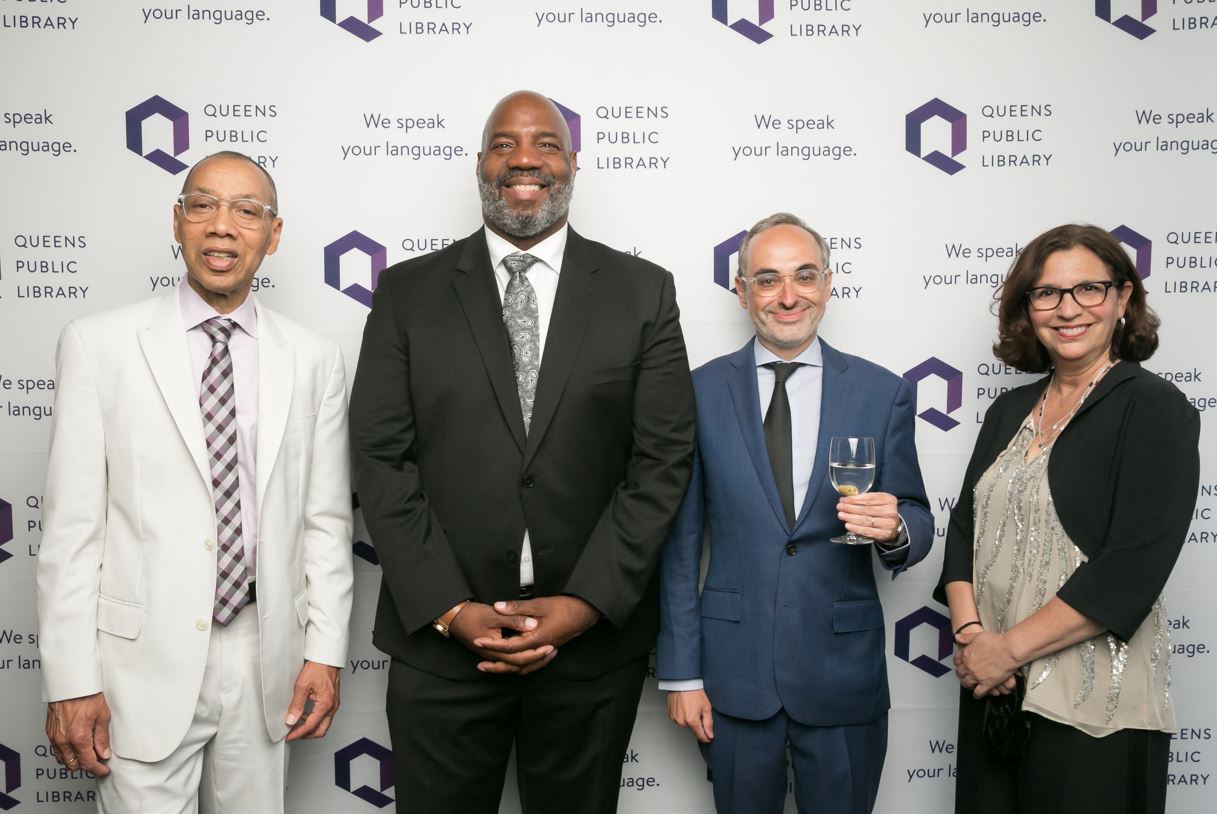 Benefit Was Held in Person for the First Time Since 2018

“The four distinguished authors we are honoring embody the dreams and the drive of the people of Queens,” said Queens Public Library President and CEO Dennis M. Walcott. “Their experiences growing up in our diverse borough and using Queens Public Library mirror those of so many people who come through our doors each year, and they exemplify our mission to transform lives and build strong communities. It is as thrilling to us as it is inspiring that they may have discovered their love of new ideas, reading and words at our branches.”

Jelani Cobb grew up in Hollis, R.J. Palacio spent her childhood in Flushing, Min Jin Lee moved from South Korea to Elmhurst and Gary Shteyngart from the Soviet Union to Kew Gardens Hills, both when they were 7 years old. They all frequented their local library branches, developing their passion for reading and writing.

During the gala, each honoree received a Queens Public Library Award, established this year to recognize individuals who have made distinguished contributions to the arts and letters.

“As a kid who grew up doing homework in the Queens Public Libraries, I’m deeply humbled and honored by this recognition. Our libraries are our most invaluable resource,” Jelani Cobb said.

“I’m humbled to be included with this distinguished group of honorees,” said Min Jin Lee, who unfortunately was not able to attend the gala after testing positive for COVID-19. “That said, I am very proud to be a product of the Queens Public Library System.”

As New York reemerges from the pandemic, Queens Public Library continues to serve the public not only through books, arts and culture, job and career support, and educational programs, but it is also integral to the overall health of our borough by providing cooling centers in the summer, COVID-19 testing sites, vaccination sites and distributing at-home COVID-19 tests.

For 126 years, Queens Public Library has been dedicated to building resilience and unity in Queens, knowing that the borough’s communities are counting on library services now and for the years to come.

The 2022 Gala will be recorded and available for viewing virtually on the QPL website on July 11, 2022.

Proceeds from the event will go towards funding the Library’s free public services, including materials, programs, classes, computers, tech equipment and more, at 66 locations across Queens.

For more information about the event, go here. 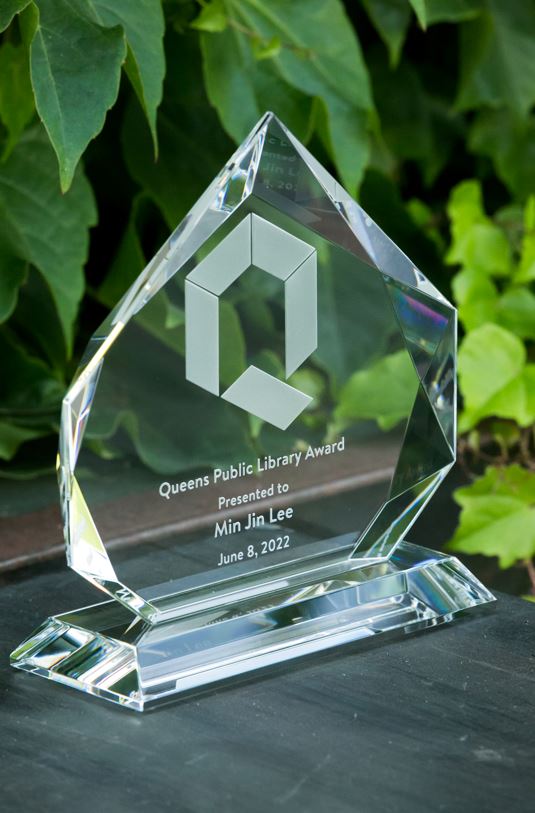 Min Jin Lee was not able to attend the gala after testing positive for COVID-19.

Jelani Cobb is the incoming dean of Columbia Journalism School. He is currently the Ira A. Lipman Professor of Journalism and Director of the Ira A. Lipman Center for Journalism and Civil and Human Rights. Cobb is also a staff writer at The New Yorker and, in 2018, was a finalist for the Pulitzer Prize in commentary. He has written or edited six books, including “The Matter of Black Lives: Writing from the New Yorker.” His 2020 film, “Whose Vote Counts?,” received the Peabody Award for News Documentary.

Min Jin Lee is the author of the novels Free Food for Millionaires and Pachinko, which was named a finalist for the National Book Award and a runner-up for the Dayton Literary Peace Prize. Her writing has been featured in The New Yorker, The New York Review of Books, One Story, The New York Times Book Review, and The Wall Street Journal. She is the recipient of fellowships in Fiction from the Guggenheim Foundation, the Radcliffe Institute of Advanced Study at Harvard, and the New York Foundation for the Arts. In 2019, she was inducted into the New York Foundation for the Arts Hall of Fame. She is a Writer-in-Residence at Amherst College and serves as a trustee of PEN America and a director of the Authors Guild. She is at work on her third novel, American Hagwon and a nonfiction work, Name Recognition.

R. J. Palacio is the author of the #1 New York Times bestseller Wonder, which has sold over 13 million copies worldwide. The book's message inspired the Choose Kind movement and has been embraced by readers around the world, with the book published in over 50 languages. Wonder was made into a blockbuster movie starring Julia Roberts, Owen Wilson, and Jacob Tremblay. Palacio’s other New York Times bestselling books include Pony, 365 Days of Wonder: Mr. Browne’s Book of Precepts, Auggie & Me: Three Wonder Stories, the picture book We’re All Wonders, and the graphic novel White Bird, which is currently being filmed as a major motion picture starring Gillian Anderson and Helen Mirren. Palacio lives in Brooklyn with her husband, two sons, and two dogs.

Gary Shteyngart is the New York Times bestselling author of the memoir Little Failure (a National Book Critics Circle Award finalist) and the novels Super Sad True Love Story (winner of the Bollinger Everyman Wodehouse Prize), Lake Success, Absurdistan, and The Russian Debutante’s Handbook (winner of the Stephen Crane Award for First Fiction and the National Jewish Book Award for Fiction). His books regularly appear on best-of lists around the world and have been published in thirty countries. His latest novel, OUR COUNTRY FRIENDS, was an instant New York Times bestseller and was named one of the best books of the year by the New York Times, Washington Post, Los Angeles Times, Time, Kirkus Review, and others. New York Times critic Molly Young called it “the perfect novel for these times and all times, the single textual artifact from the pandemic era I would place in a time capsule as a representation of all that is good and true and beautiful about literature. I hope the extraterrestrials who exhume it will agree.”

Queens Public Library is one of the largest and busiest public library systems in the United States, dedicated to serving the most ethnically and culturally diverse area in the country. An independent, non-profit organization founded 126 years ago, QPL offers free access to a collection of more than 5 million books and other materials in multiple languages, technology and digital resources, and more than 80,000 educational, cultural, and civic programs annually. QPL consists of 66 locations across the borough, including branch libraries, a Central Library, seven adult learning centers, a technology center, and two teen centers, and attracted more than 11 million visitors in 2019. 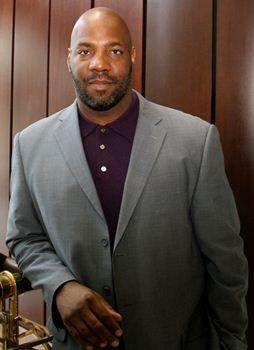 An Interview with Author &…

UPDATE: Don't miss our upcoming evening of conversation with Jelani…